"Fathers and Sons" a novel by Ivan Turgenev 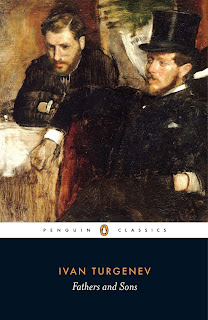 Ivan Turgenev's  novel "Fathers and Sons" comes to our mind when we ever thought of the ideology of  Nihilism. What is it all about and what kind of impact it laid on the generation of nineteenth century..? For all that, we have to read this novel. We can also know that how the philosophical currents of France and Germany influenced the whole Russia. Slavs of various countries like Bulgaria, Poland and other countries have common cultural framework and they are proud of being apart from western European influence. Even in Russia there was considerable chunk of population who support the idea of  Slavophile. Russian Orthodox Church played vital role in it.

Well, what is the concept of Nihilism..? ,broadly speaking, it  rejects all kinds of religious and moral values and opposes all kinds of authorities. Without proper scientific examination and scrutiny, Nihilists don't accept anything. Practical approach in everything. This novel based on the life of a nihilist. His name was Bazarov. Human life can be lived with some principles but at the same time it's very difficult to stick to them in all conditions.

Now, let's get into the story. It was in the month of May,1859. A gentleman named by Nikolai Kirsanov was waiting for his son at the wayside of his nearby village. His son Arkady was studying at St.Petersburg university. His son arrived with his friend Bajarov. Nikolai received them wholeheartedly. Nikolai was a land owner of 5000 acres and owned 200 serfs also. Bajarov soon was disapproved by Nikolai and his brother Powell. Reasons are simple but bigger enough for the brothers of Nikolai to hate him.

Bajarov criticized Nikolai's liking towards classical music, poetry of Pushkin and other habits of  appreciation of Russian history. Nikolai argued that not every old thing is to be hated. With Powell too, he maintained strained relation. Bazarov criticized even Powell for his passion for English way of dressing and their magazines. Arkady placated his father and uncle when they were angry about Bazarov's character. Strangely enough, Bazarov later fell in love with Anna Odinstsova. He lost his  scientific temperament in this matter and also with the maid who kept by Nikolai. Bazarov was bound to face duel with Powell. There were many layers in the story. One should read it for having the real pleasure.

He did not lead a happy life even with his parents because of his nihilistic approach of life. At last, he died when he was conducting an autopsy. It showcased the thinking trends of Rural and urban areas of  Russian society. This novel published in 1862 in Russian language. And made a sensation. Translated into English in the year of 1867. Captured the attention of whole Europe and was followed by Leo Tolstoy.

READ MY STORIES ON KINDLE