A Folk Festival of Arunachal Pradesh 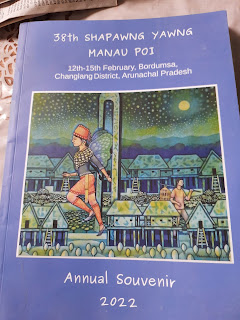 Yesterday, I have received a unique souvenir from the state of Arunachal Pradesh. It's all about a Folk Festival of Singpho race, and which has been running since 1985 to the present year. Dr. Gumlat Ong Maio, one of its editorial members has been rushed it on my request. My only quest for knowing the culture and heritage of North Eastern states made me  read the material of its kind. This festival happened in the month of this February. But creating a book out of immense articles, photos and other contributions is  something like not an easy work. 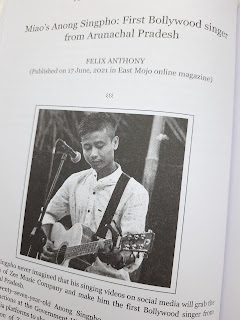 This souvenir got printed in a beautiful way with the articles of many sorts like Youngsters who penned for an essay competition, other ones focused on Singpho's Folk life. By the way, the festival is called by Shapawng Yawng Manau Poi. And it's the 38th year of celebration. Though, Singphos are basically Budhists, they are always trying to keep up their age old unique customs. Nat-Worshipping is the name for it. Many photographs of various cultural activities placed in this publication. 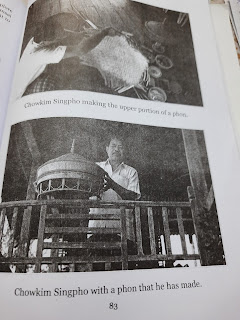 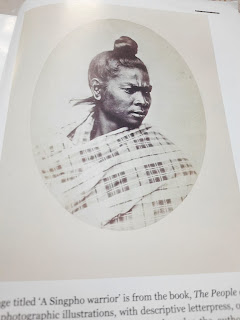 Some articles are in English and some are in their own native language, of course, with using English alphabets. Congratulatory messages from the Governor of the state and other dignitaries added. Bordumsa is the place where all these activities has taken place. My blog readers could already have known about the Dr. Gumlat Ong Maio was a well known writer apart from being a medical doctor. And his book was also reviewed in this blog some time back. 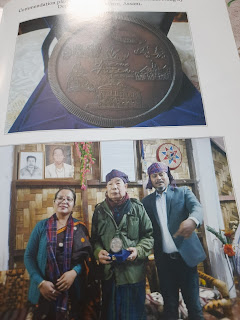